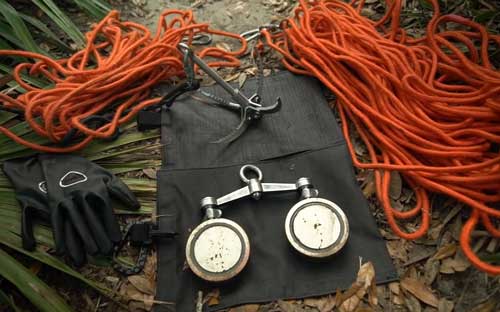 The concept of magnet fishing is simple enough, isn’t it? It’s basically dragging a magnet on a string along a riverbed or lake bed, and you see what comes up.

Most of the time, you just find common stuff. You may drag up coins, and metal tags, or maybe even some odd tools such as screwdrivers.

No matter how often that happens, you can’t quite help wondering about the next haul. That’s actually part of the fun—it’s like opening a giftwrapped present at Christmas or your birthday.

The good news is that sometimes people find the most astounding items while magnet fishing. Here are some real examples:

Diamonds are forever, and someone found that out while magnet fishing in the Thames River in jolly old England. Actually, he found two of these diamond bracelets, along with a couple of coins.

If he decides to sell these bracelets, he’s really in for some good money. Even without the antique value of the pieces, a 1-carat diamond can go anywhere from $2,000 up to $25,000. 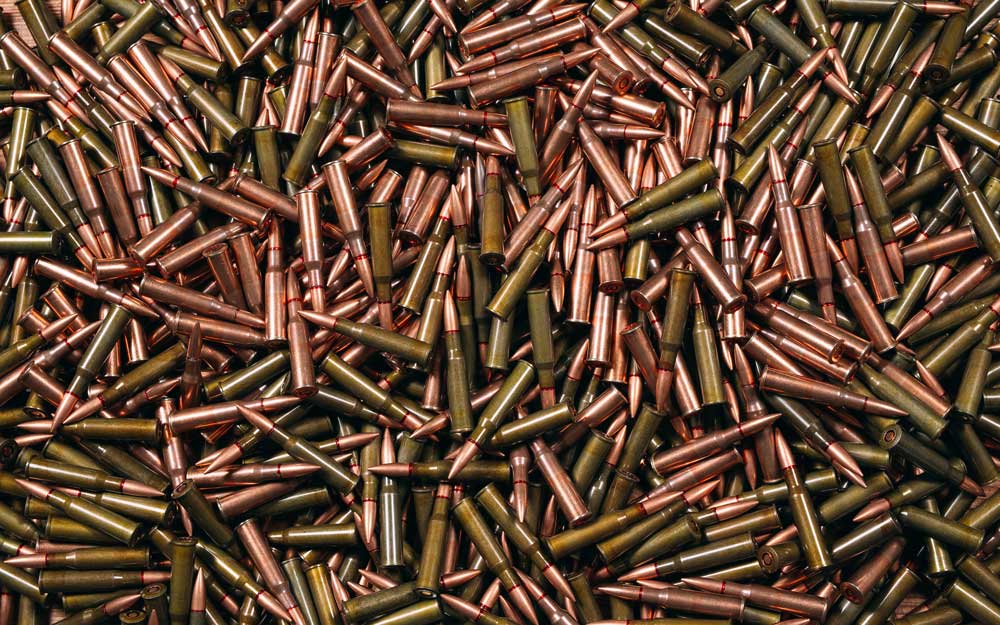 It’s one thing to reel in one or two bullets every now and then. But it’s astonishing when you end up with 3,000 bullets from a river.

This is what happened to Leah Knewstub of Woking, Surrey, and she’s just 6 years old. She was casting from an old bridge under a viaduct, and she just kept on hauling in these bullets.

Of course, the origin of the bullets wasn’t really a surprise, since Leah and her parents were magnet fishing beside the Pirbright Army Training Centre.

That’s not actually all they found. Along the way, they’ve also found safes, cash registers, laptops, and bicycles.

If you’re a WWII history buff, you’ll love this find. Someone found an Enigma codebreaking machine from the silt at the bottom of a pond.

Breaking the Enigma code was perhaps one of the key advantages for the Allies during the Second World War, and England managed to break it with the help of Polish codebreakers.

The “Ultra” intel England gleaned from breaking the Enigma code allowed Allied troops to know about German positions and plans during their blitzkrieg attacks.

Stolen Cashbox with £100 in Notes

Everyone knows that paper money isn’t magnetic, but you can still haul them from a river bed when they’re in a metal container. Michael and a friend of his from Stockport, Manchester found this out, as reported by the Manchester Evening News back in 2017.

These guys were magnet fishing from a canal, and they dragged out cash box. When they opened it, they found £100 in paper bills.

As they were law-abiding citizens, they assumed the cashbox was stolen so they tried to turn this over to the police. But the police officials weren’t interested, so the money paid for a fine meal instead! 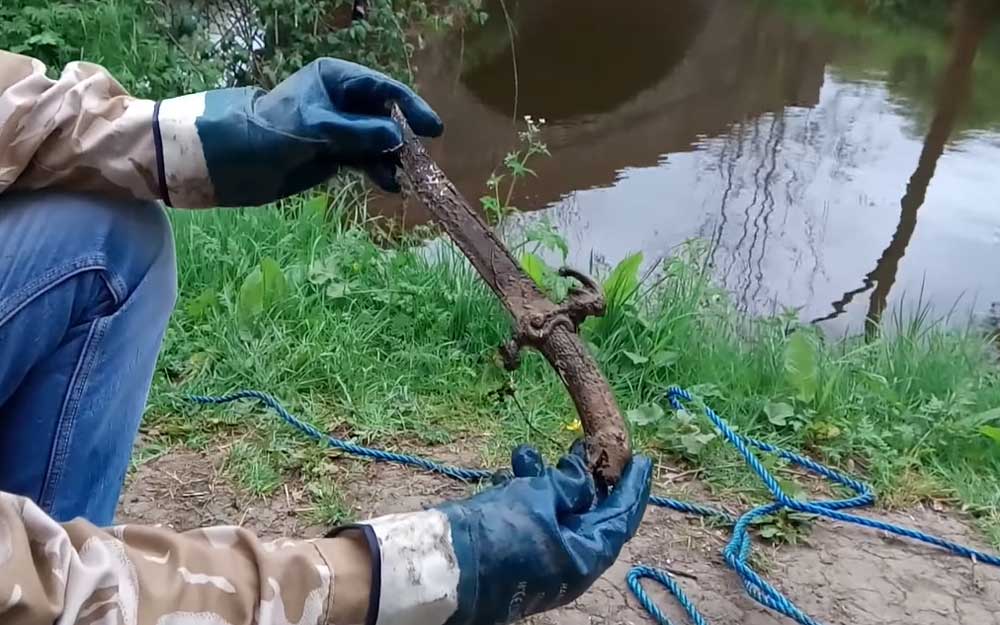 A few boys were magnet fishing under a bridge on the bank of the Wreake river in Leicester, back in 2017. This bridge is fairly new (by English standards), since it was built in 1790.

Perhaps someone on that bridge dropped their dagger in the river, as these boys found it while magnet fishing. It’s quite ornate, and a truly wondrous memento.

Of course, even if you found a more recent knife it’s always a fun find. You just need to clean it properly.

Mix a solution of warm water with mild dish soap, and use this to scrub away the dirt on these knives.

A Treasure Box of Dollars

It takes a while to collect enough coins from magnet fishing but one lucky guy found a box filled with about 300 dollars in coins.

The box also contained rolls of paper money, but the YouTube video that featured this find didn’t report how much that money was. Probably to keep the IRS away?

2 Safes with Money and Jewelry

On May 22, 2020, a YouTube video appeared showing this guy finding two safes at once while magnet fishing.

After opening the safes, he found jewelry such as bracelets, necklaces, and even a gold, jeweled pocket watch. The safes contained coins as well.

The video didn’t show the appraisal of the haul’s value, but then monetary gain isn’t really the main point of magnet fishing, is it? It’s all about the excitement of just finding stuff you don’t expect!

A Gold Earring in Amsterdam

A tourist in Amsterdam just settled himself on a bank of a canal, and then just started magnet fishing and hauling out various stuff.

The “stiff” included various coins, along with a bike, a discarded monitor, and various odds and ends.

A cop even stood by and watched in bemusement, maybe hoping for lost evidence of crimes. Or maybe he was making sure all the junk was disposed of properly.

But at the end, the guy found a nice golden earring, which should fetch a fair bit of money. Gold now sells at $1,954 per ounce, and about $63 per gram.

A Bunch of German Helmets

Some lucky guy found a stash of German World War II helmets in Europe. These were probably from a mass burial site, and the helmets naturally ended up in the nearby river.

No one’s really sure what each one costs, as they’re mostly rusty though they do have some historical value.

But a brand-new copy of a German World War II helmet costs about $70 on Amazon. This guy found dozens of these helmets, and each one of these old things work better as antique décor in a home.

A Bagful of Guns and Ammo

One family went magnet fishing in River Irwell in Salford, UK, and got themselves a rather interesting find. They pulled in an innocuous-looking bag, but inside they found 2 handguns and a shotgun, along with some ammunition.

They just turned over their find to the police, who were happy enough to investigate the matter. For that family, the excitement was more than enough!

It’s exciting enough when you find a single gun while magnet fishing. This father and son found themselves continuously finding guns and various gun parts in 2015 by the King Sedgemoor Drain at the Grey Lake in Kingsweston Sluice, Somerset.

They found an AK-47, a Czech Vz.25 submachine gun, a Belgian FN CAL, and a couple of M16s, but they also found a WWII Thompson machine gun. What really interests history buffs is that there’s also a revolver here from the US civil war era.

The boys who made this discovery found 80 guns in total, with 30 firearms dating back to the World War 2 era.

It’s one thing to find rusted guns. But it’s another thing if you find a grenade while magnet fishing—and it’s still able to go boom.

That’s what happened in 2017, when a bunch of kids, with ages ranging from 9 to 16 years old, found a grenade in Cheshire. They sent a picture of it through their smartphone to their family.

One of the uncles recognized it as a WWII grenade. What made him call the police right away was that he saw in the picture that the grenade didn’t have a pin.

While the kids thought it was a dud, the police didn’t think so. They called the Royal Logistic Corps Bomb Disposal unit, which safely exploded the grenade.

A Bike Good as New

It’s not really all that uncommon for people to find an entire bike while magnet fishing. Just go to YouTube and you’ll find lots of videos as evidence.

But for the most part, the bikes you’ll likely find will be rusted beyond repair. Sure, it’s exciting to find one, but then you have to get rid of it properly afterwards.

However, Michael Trimm and his wife Trisha found virtually a brand-new bike while magnet fishing in the Milwaukee River. They stood at a pedestrian bridge near Old World Third Street and Highland Boulevard downtown and tossed their magnet on a string into the river below.

When they pulled it up, they found a bike that’s still working and had no rust issues that couldn’t be fixed. In fact, the BMX bike still had air in the wheels!

If you heard about other exciting magnet fishing finds, why not tell everyone about it in the comments section? We’d love to hear about it, and so will the other readers.