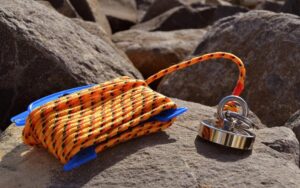 If you’ve ever checked out YouTube and watched a video on magnet fishing, you’ll find that the site actually has hundreds of thousands of videos on using a magnet to fish stuff out of the water.

It’s basically a version of metal detecting, except this time you’re not burrowing in the sand to find items left behind by other people. Instead, you use a magnet to haul in metallic items from rivers, lakes, ponds, and canals.

It can be a very fun time, which is why an increasing number of people like to do it. You’ll be amazed at what stuff you can find underwater, such as safes and working bikes.

So how do you start? Let’s check out every step you need to take to make a proper start with your new hobby.

A quick call or visit to your police department should work, though a Google search may help as well.

Some places forbid magnet fishing because of the possibility of finding actual live grenades. This has happened too many times, all over the world.

Aside from the obvious danger of finding a grenade, it also takes a lot of time and effort for the police to detonate the grenade safely. Cops are rather busy these days and they don’t really want to add to their responsibilities.

Once you’re sure that magnet fishing is safe, just keep in mind that you may still need to contact the local law enforcement officials for certain finds. If you manage to haul in a cache of firearms, for example, it’s really a good idea to call 911.

Most of the time, we recommend that you go with a terrific kit that comes with everything you need. But then again, you still have to determine just how “terrific” the various items included in the magnet fishing kit.

That starts with the magnet, which is much more powerful than the magnets that you find sticking to your fridge. These magnets can have tremendous pulling force.

Start with a magnet with a pulling force of at least 500 pounds. Theoretically, that means that it can haul in an item that weighs 500 pounds without the item pulling off the magnet.

This doesn’t mean that you’re going to lift 500-pound objects from the water on a regular basis. This pulling force rating simply indicates the pulling force when the circumstances are perfect.

That means you have a flat and clean surface for the magnet to attach to. However, under the water the items you may pull in are almost never in an ideal position or condition.

Often, these items are at an angle, so the magnet doesn’t quite fully attach to a flat surface. Also, the item may be dirty and covered with grime, and that will block some of the pulling force as well.

These reasons are why you need a really powerful magnet. Some magnets offer pulling forces that can go pas 1,200 pounds!

Most of the time, specifically designed fishing magnets are already set in a nice, convenient size. That means it’s big enough to exert a lot of pulling force, while also small enough that it’s easy to bring with you.

Often, the best fishing magnets come with some sort of copper-nickel coating. This coating protects the magnet from chipping and cracking.

Usually, you also find a stainless-steel cover for the magnet to also keep the edges from chipping. Just make sure the cover is rustproof.

Many of the more affordable fishing magnets only exert pulling force from a single side. The design sets the eyebolt in the very center of the magnet, which is often shaped like a disk or a hockey puck.

This works very well when your modus operandi is to set on a pedestrian bridge and then lower the magnet on a rope down to the water. You’re able to set the underside of the magnet down to whatever objects are under the water, and then you can just pull the rope up to haul in whatever you get.

The problem here is when you throw the magnet into the water, when you’re standing by the bank of a river or a pond.

When you start pulling the rope attached to the magnet, the magnet may turn upside down as you go. That means the magnetic side isn’t doing you any good.

It’s for this reason why some people prefer double-sided magnets. It works better because regardless of how it lies flat, the side of the magnet that’s down on the river is still exerting some pull.

Even when you’re dragging the magnet like it’s a wheel on a riverbed (since the eyebolt is attached to the edge of the disk-shaped magnet this time), you still have 2 sides trying to detect metallic items on both sides of the magnet.

So, what should you do?

One option is to just go with a double-sided magnet while opting for a powerful pulling force on both sides. There are magnets which can exert as much as 800 pounds of pulling force on either side.

The other option is to go with 2 magnets. You can use the double-sided magnet for detecting, and switch to a more powerful single-sided magnet to pull the stuff out of the water. 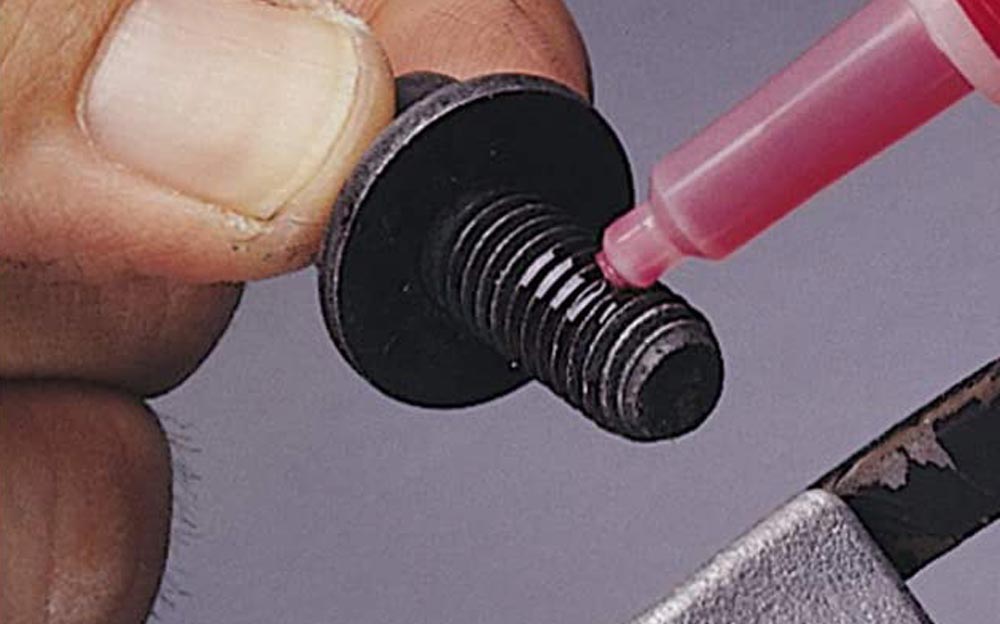 Next to the magnet, we have to mention the oft-overlooked threadlocker liquid. The point of this liquid is to prevent the very real possibility that you pull out the eyebolt from the countersunk hole on the magnet.

That means you don’t just lose the find to the water—you lose your magnet too.

You may need to let the threadlocker set for a few hours (24 hours, in some cases), before you’re sure that it’s working.

The rope is the other crucial component for your gear. In many ways, it’s just as important as the magnet.

If you’re a newbie, you first need to get a properly static rope. That means it doesn’t stretch, so you can pull on the magnet when you’re pulling on the rope.

Stretchy ropes don’t work, and can be dangerous when hauling sharp-edged metallic items from the water. The metallic item can just quickly rush out of the water as a result, and injure someone.

Avoid ropes that are labeled as “dynamic”. These are the opposite of static ropes, which means they’re stretchy.

Get a Rope with a Carabiner Attached

Some experts may tell you to learn about knots, so that you can attach the rope directly on to your magnet with enough security. Or you can buy a carabiner separately, and then you tie the rope to it.

But the best ropes will already have a carabiner securely attached. Some are either looped or knotted to the carabiner, and the ends of the knot are generally encased in a tight plastic protective casing to keep the knot from going loose.

You may even find ropes with stitched ends for the knot or loop around the carabiner. That way, you’re sure that the loop or knot won’t fail.

Get the Proper Rope Strength

Obviously, having a powerful magnet able to pull heavy items won’t be of much use when you have a thin, flimsy rope that breaks and tears easily.

The rope has to be long enough to reach the riverbed if you’re standing on a pedestrian bridge atop a river. In some cases, it’s best to go with a 100-ft rope.

However, shorter ropes at 60 feet or so may be easier to handle. That’s especially true when your technique is to throw the magnet out into the water while you stand at the bank of the water.

You also need a waterproof pair of gloves, to give you a proper grip on the rope. It should also protect your hands from rope burn.

If you’re standing by the bank of the river, think about wearing waterproof boots. Sooner or later, you may find yourself wading into the water to haul in your stuff.

Obviously, you need a proper body of water. You can go with a river, pond, lake, or canal.

Your spot should be one where you’re likely to find various items that people may get rid off or lose. If it’s an out-of-the way spot miles from civilization, you’re unlikely to find anything metallic.

Now that you have your gear and a nice spot to practice in, patiently start.

Here are some methods you can try:

Trolling with a Boat

On the face of it, magnet fishing is simple. In many ways, it’s just like “real” fishing. You need patience, and there are times when you don’t get anything interesting.

What gets you going is the very real possibility that the next time will offer a more exciting find. That’s the kind of optimism you need for magnet fishing and for real fishing too! 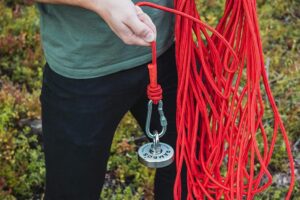