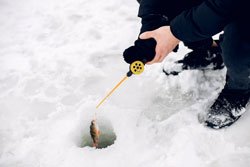 The winter season may force many of us indoors but it doesn’t mean that we can’t enjoy any outdoor activities during the freezing months.

This is one outdoor activity that you can definitely do when it’s frigid outside as you’ll first need the water to become solid to get on it.

It offers an adventure even if it doesn’t seem too action-packed to many.

Aside from actually enjoying this wintry leisurely activity, learning about it is also a fun thing to do. The challenges it poses make its basics interesting to know about. Its history is also worth a look as it is packed with fascinating details.

Want to know when did people start ice fishing? Allow us to discuss its key details below. 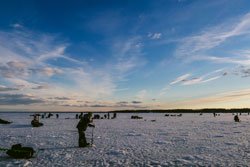 To tell you the truth, the early beginnings of ice fishing is not known. Historians cannot pinpoint a definite time when it all started but archaeologists found evidence of ice fishing that date as far back as 2000 years ago.

Various subarctic/arctic cultures from around the globe could have started the tradition at around the same time thousands of years ago for survival.

In the US and Canada, the First Nation peoples have been enjoying the activity for millennia while the Inuit is believed to have been trying out various fishing methods for more than a thousand years.

Modern ice fishing, as we know it today, can be traced back to the early 1900s when the rods became shorter and better tailored for the said activity.

Different Ways to Catch a Fish 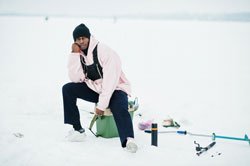 While experts cannot say for certain when ice fishing became an activity or a method for hunting for food, they have, however, discovered that there are several ways to successfully catch fish under the ice. This is actually the more fascinating part of the story as the different methods showcase great skill and ingenuity of the indigenous people.

In the early days, before rods and lines were used, it has been determined that spears were used to catch fish. Ancient hardwater anglers would carve out a hole in the ice and lower a piece of fish-shaped wood to lure real fish into the open area.

Once the fish comes out in the open, a harpoon or spear will be used to catch them. The Inuit used a rather sophisticated variety, known as the kakivait or kakivak which has three pointed ends to better secure its hold on the fish.

Rods were used, too, after a while but when they discovered the use of nets, things really changed. This method gave them a convenient way to generate a significantly higher yield. Tip-ups were devised later on and they provided another way to conveniently lure fish at varying depths.

Darkhouse ice fishing is another interesting way to catch fish in the freezing months. It involves building a hut around the hole in order to prevent light from streaming in. This makes it easier to lure fish into the hole. Fish are then caught using spears and harpoons using this method.

With everything said above, it can be easier to see just how fun ice fishing can be. There are so many ways to enjoy this sport as there are so many methods that you can try out to further challenge yourself in the process.

Exploring more about its history is another way to appreciate this age-old outdoor activity. It has always been a fun and innovative hunting technique, so it might also prove to be inspiring if you’re the tinkering kind. 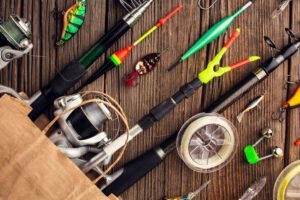 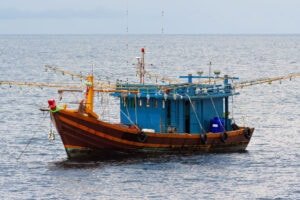 What are the Effects of Commercial Fishing: A Quick Look at the Fishing Industry’s Impact on the Planet